The Last Diamond Unearthed: The Countdown is On! 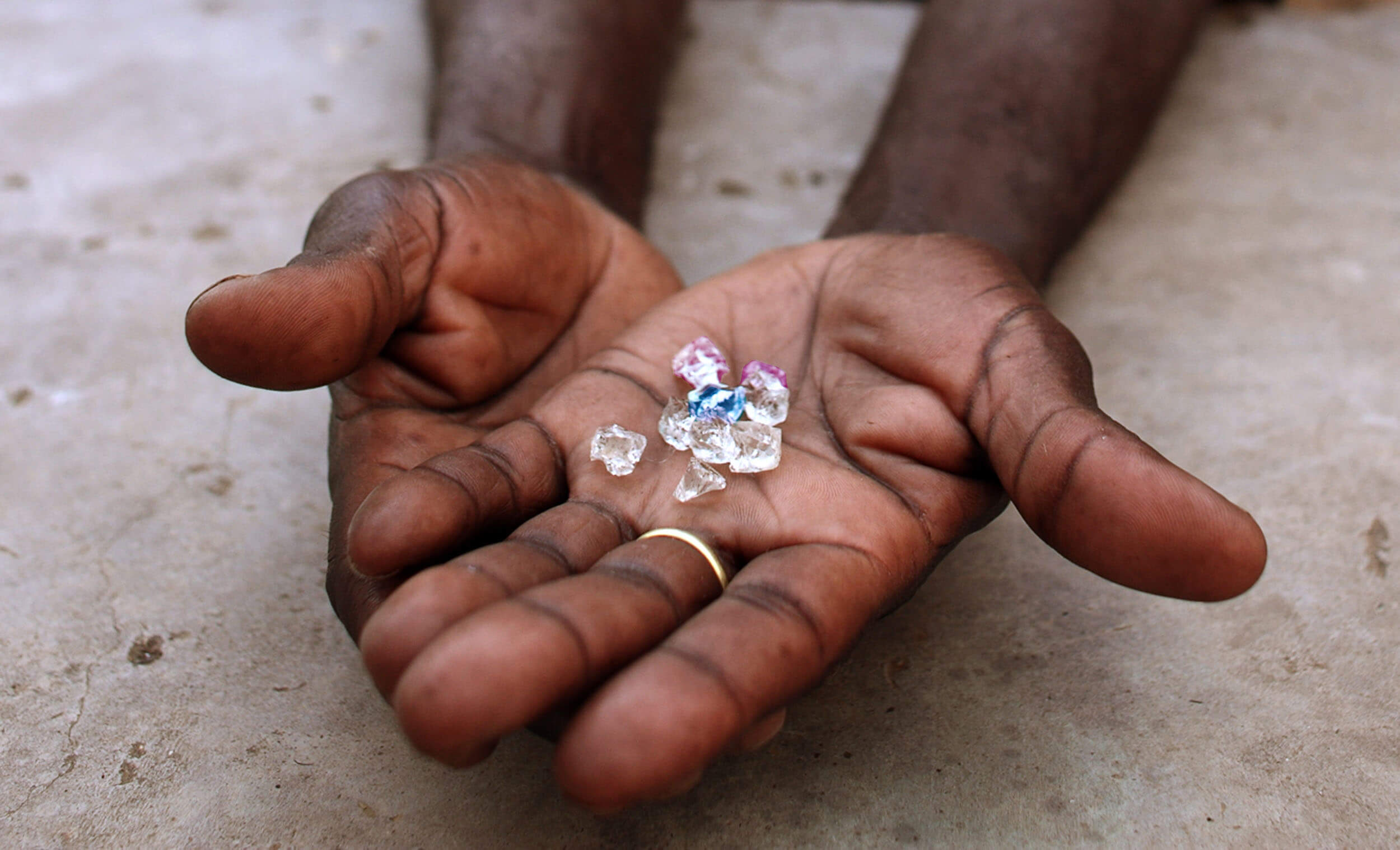 The Last Diamond Unearthed: The Countdown is On!

A new era for the second-hand market

By the time your grandchildren buy their first diamond, most mines will have reached the end of their life cycle and most diamonds will be sourced from the second-hand market. These circumstances will make the pre-owned diamond arena the largest “mine” in the world.

The vast majority of the world’s unearthed diamonds are located 150-750 km below the earth’s crust. Prehistoric volcanic eruptions brought some of them to the surface at a reachable distance of just a few hundred meters underneath. This means that once all mines have been depleted, the era of unearthed rough diamonds will be over. Assuming that small, independent mines in various parts of the world will close much sooner than will the large ones, the significant drop in supply will occur in just a few decades; the last miner will turn off the lights, on his way out, in approximately 61 years.

The popularity of white and Fancy Color diamonds is strong right now. However, the market is slowly transforming, based on the premise that within two generations, no diamond mines will be able to produce more stones. At present, 40 mines worldwide account for 90% of the world’s diamond production but only 13% of them have a lifespan in excess of 40 years, and not more than 61 years. The availability of diamonds of all colors and quality levels will be affected, with no exceptions. The number of diamonds in circulation will thus be finite much sooner than people realize. This is not hyperbole; it is the most overlooked piece of information within the industry, with little knowledge available outside it. Within this 40-to-60-year span, 98% of all diamond mines will be exhausted, and within a quarter of a century, the majority of the 45 most notable diamond mines operating at the moment will cease to exist. 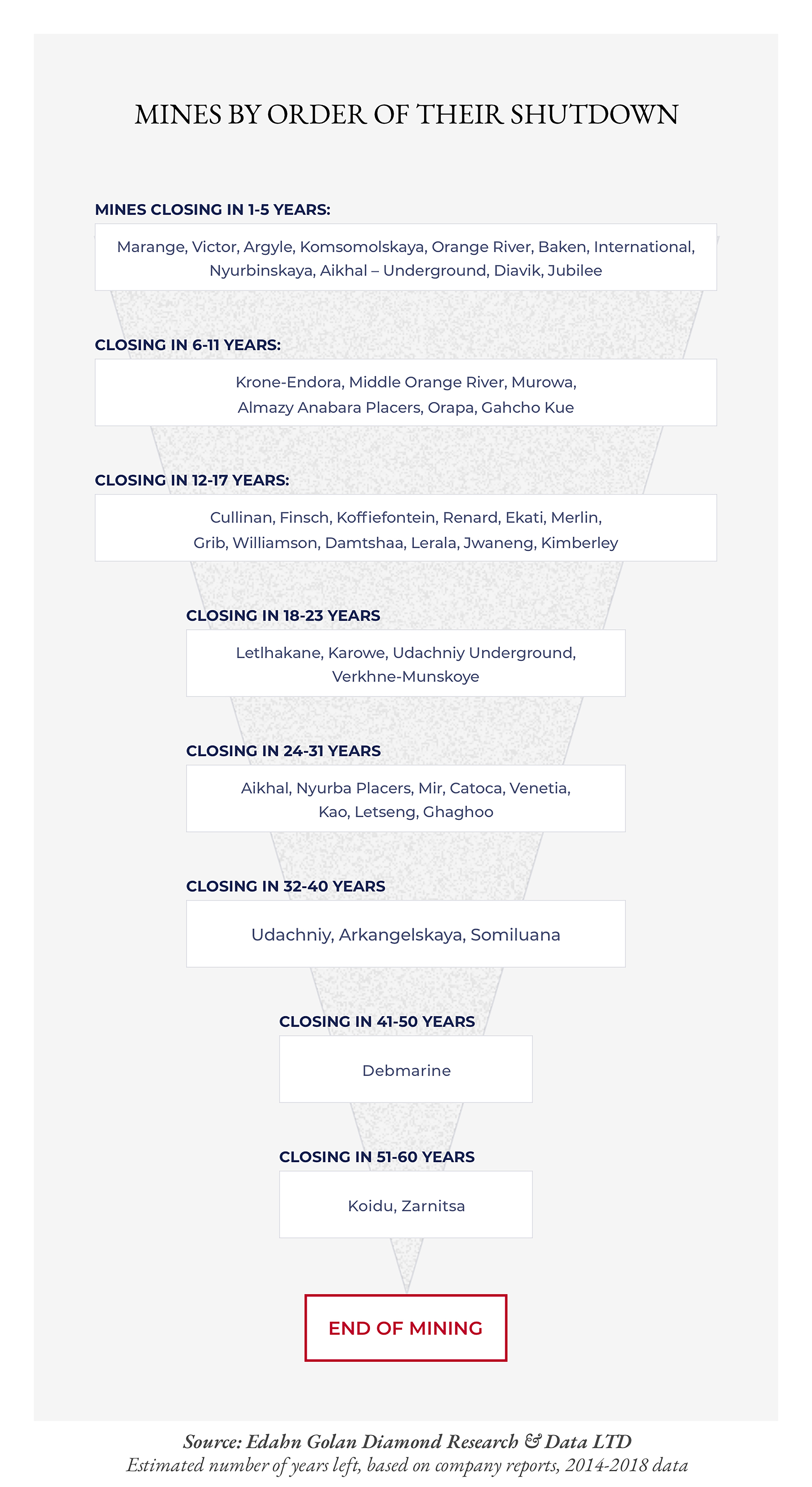 No new ‘mega-mine’ is expected to be found in the foreseeable future; If one is found, it will begin operations only at the end of this century — at best. This addition will be too little, too late, to ‘move the needle’ back to its current position because the number of high net worth individuals, the main buyers for this segment of the market, is increasing much faster than the rate at which diamonds are unearthed. In its annual report on the state of global wealth, Credit Suisse noted that 1.1 million new millionaires were created in the US alone in 2017.

This is not to say that the diamond industry is in a crisis mode; far from it. All it means is that there will be no more renewable supplies and that the second-hand market will become the largest active “mine”. The industry will then need to change its approach. Manufacturing and related technology will slowly disappear. The GIA will be busy mainly validating old reports; ‘Second-hand broker’ will be a new occupation, and jewelry brands will buy diamonds back from the public in order to maintain a steady supply of diamond jewelry. Thanks to the new ‘Lightbox’ brand launched by De Beers in 2018, lab-grown diamonds are positioned at the bottom of the luxury food-chain, next to Swarovski crystal and fake Louis Vuitton bags and are no longer in the equation.

The face of buying and selling will change beyond recognition; but if companies develop an efficient strategy, diamond trading can remain highly profitable. With no more rough and only polished diamond recuts to trade, the terminal number of diamonds left will inevitably push prices to new heights. Even diamonds with poor characteristics will see an unprecedented rise in value.

The hottest news story of the century, about “The last unearthed diamond,” will be read all over the world in approximately 61 years, yet will push prices up long before, as people will begin speculating once the first signs of a shortage start to appear. This means that there is no reason why diamond buyers or anyone with long-term vision can’t start realizing an extra premium from this scarcity right now.

Fancy Color diamonds, considered to be the rarest of the rare, will be the most sought after, the ‘must haves’ of this new world diamond order, and will take the lead in price increases.

Two generations may not seem a period of time relevant to many of us, although those who missed an opportunity to buy a Jean-Michel Basquiat for $5,000 in the 1980s can probably relate a bit better to the idea of such a long-term investment.

A couple of decades is a timespan that seems almost insignificant, but more immediate effects may simulate the future; for example, take Australia’s Argyle diamond mine. This mine is famous for being the producer of most of the world’s pink melee diamonds, and it has just 2 to 3 years at most before it shuts down and transformed into an artificial lake.

While those within the industry can only speculate as to what will become of this major market tremor – a simple calculation suggests that the price of pink melee will rise sharply – investors with deep pockets who understand the significance of such an event are already stocking up on as many pinks as they can, pushing prices up. There will also be a knock-on effect on the sale of other diamonds but mainly for Fancy Color Diamonds, which will become the most sought-after stone due to their association with their finite pink ‘relatives.’ For the coming generations, diamonds will not be bought just as an ornament of beauty but as speculative, long-term investments.

With world-famous sites like the Kimberley mine in South Africa having less than a decade to run, now is the time for everyone within the industry to devise a strategy for the new world order of diamond dealing, regardless of the economy’s current instability and its effect on today’s diamond market.

There will also be an inevitable increase in the value of polished diamonds, at every grade, but especially for items considered unique collectables.

Those people owning polished diamonds, especially Fancy Color diamonds, the rarest category of all, will stop taking their family jewelry box for granted. Their family’s fortunes could swell incredibly with the anticipated hike in demand for these rarities. With an expanding wealthy class and a decrease in supply, the next generation will be able to sell their grandmother’s 20-carat Vivid Yellow diamond ring back to one of the jewelry brands at 10 times the price originally paid for it.

The state of mind that we all need to adopt is that the second-hand market will thrive and dominate diamond trading in the coming years. The last diamond that will be unearthed in about 60 years will hail in a new era, following decades of sharp price increases of diamonds in general and Fancy Color diamonds in particular.

Your family’s diamond collection will probably become the most valuable portable asset available in the coming centuries.

The Last Diamond Unearthed: The Countdown is On!
explore
‘Bubbles’ in Diamonds?
explore
How to Take the Perfect Diamond Photo with your Phone
explore
Your Gateway to Fancy Color Business 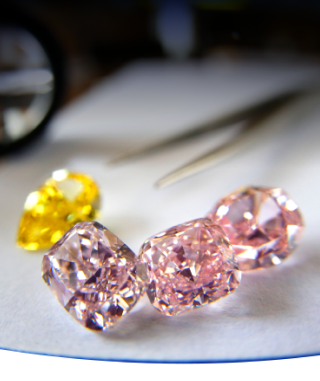